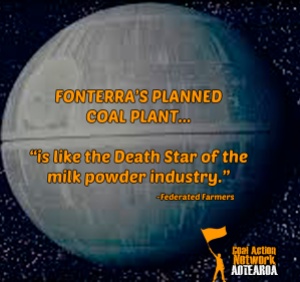 The decision to let Fonterra build a massive, coal-fired boiler in South Canterbury is a blow for the climate and a sustainable future, and flies in the face of any regard for our grandchildren, Coal Action Network Aotearoa (CANA) said today.

According to an expert witness for CANA (1), this would have to see an increase in the South Canterbury/North Otago dairy herd of 270,000 cows, in order to provide enough milk to feed the factory.

In May, in the face of what it called “strong opposition,” Fonterra cut its plans back to one boiler instead of two.

“Even one new coal boiler will over-extend the environmental capacity of the area,” said Rosemary Penwarden, a grandmother, of CANA.  “We are extremely disappointed that the Commissioners didn’t take the wider impact of the plant into account in their decision – the region can’t take it.

“We are seeing droughts, our rivers are suffering from over-extraction and pollution, and sea level rise is hitting our shores.   It’s our grandchildren who will be left to deal with the worsening climate impacts of burning more coal.  Green-lighting new coal in 2016 is ridiculous.

“Fonterra is New Zealand’s second-largest coal user;  planning a new coal boiler is a very bad look.  They should instead be looking to replace their coal boilers around the country with wood and biomass burners. Dirty coal is a fuel which may be cheap to buy now, but which will become increasingly expensive as action on climate change starts to hit in the future.”

Many local farmers were opposed to the proposal and, during the hearing, CANA also questioned the rosy economic future for milk powder painted by Fonterra, who predicted the price for milk powder would continue to rise.

Federated Farmers called the boiler a “Death Star of the milk powder industry.”

However, they argued they didn’t have to do this because Fonterra hadn’t stated any minimum amount of biomass, letting the company completely off the hook when they could have set a minimum biomass requirement.

CANA understands that Fonterra has no plans to build this plant any time soon.
“We can only hope that in the interim the company changes its attitude on climate pollution, dumps these plans, and converts the rest of its coal boilers to renewable energy,” said Ms Penwarden.

The Good Times Are Over For Solid Energy