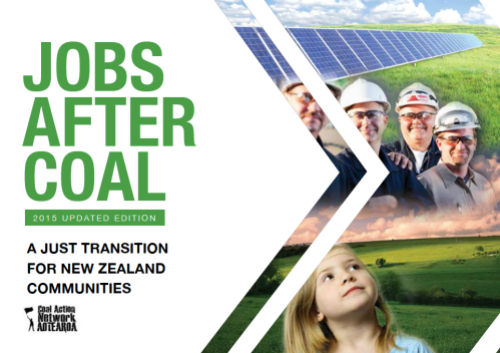 Coal mining communities in New Zealand have recently faced major disruption, uncertainty and job losses as the industry suffers from falling prices, competition from renewable energy and mounting concern at the threat of climate change.

Globally and locally, we are on the brink of a transition from the old economy, based on fossil fuels, to a new future based on clean, renewable energy. Yet many hold on to the old for fear of job losses that will leave communities with a shattered economy and no options.

That’s why, in May 2014, Coal Action Network Aotearoa launched our “Jobs After Coal” report – and why, in April 2015, we released an updated edition (pictured above). The report argues that:

But these positive outcomes depend on recognising the need for a proper and effective transition path and setting up a planned process within the community itself, including all stakeholders, with support from central and local government.

You can also read about how the report was received in communities around the country: