On Lignite and Civil Disobedience 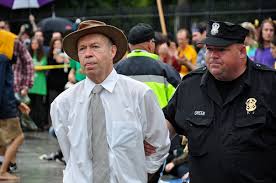 On Friday last week the website of state owned coal miner Solid Energy was hacked and visitors redirected  to a video featuring large scale destruction caused by open cast coal mining and with a link to this website. The action gained much media attention and being election eve it even managed to draw John Key out to describe the act as “underhand tactics”.

On Friday last week Roger L of Stolen Energy hacked the website of state owned coal miner Solid Energy and redirected visitors to a video featuring large scale destruction caused by open cast coal mining. The action gained much media attention and being election eve it even managed to draw John Key out to describe the act as “underhand tactics” and comment that New Zealanders wanted to have “a genuine debate” about the sale of Solid Energy.

If it is true that New Zealanders want to have a genuine debate, and I think that it is, then why did Mr Key not tell us where and when this debate would happen? Why didn’t Mr Key explain why Solid Energy has begun construction on the first of its plants in a massive scheme to turn billions of tones of dirty lignite into briquettes, diesel, and urea before this debate has happened?

Thus far the debate is conspicuous by its absence, and in the run up to the general election the question of future energy supply and climate change, surely two of the greatest challenges facing the planet today, were all but invisible. And so it was left to Roger L to move the debate forward, and he did more to bring the discussion on energy and climate to the dinner table than any party political broadcast that I saw. Those “underhand tactics” have played a brief but important role in New Zealanders being able to have a debate about such an important subject.

And let’s face it, the mining of billions of tonnes of dirty lignite coal, the resulting massive increase in greenhouse gas emissions, the loss of tens of thousands of hectares of productive land and the aquifers below them, and the clouds of coal dust, and mercury laden ash billowing across the countryside, are not things we should be rushed into. Yet construction has begun.

Surely a few hours inconvenience to the users of Solid Energy’s website seems insignificant when compared to what we risk if their mining plans are fully realised.

This country’s history is full of acts of leadership now heralded as brave and courageous, acts which were once described as “underhand” and illegal. The nuclear-free movement, women’s right to vote, the anti-Springbok Tour protests, the Save Manapouri and Save Aramoana campaigns were all peppered with actions which I am sure John Key would describe today as underhand.

Outraged farmers also engaged in a little civil disobedience when they drove a tractor and herded cows onto the steps of parliament to protest the proposed “fart tax”. While I disagree with their cause their right to show their opposition in this manner is an essential part of our modern day democracy.

Our history tells us that when those in power do not uphold the values of the population, do not make space for genuine debate, but steamroll through unpopular policy and perpetuate injustice, it is up to those men and woman determined enough to stand up, even peacefully break the law, to get the message out and to make change happen.

So I applaud Roger L for raising the questions that so few in power seem to want to answer- that of our future energy requirements and the impending threat of runaway climate change.

Perhaps Roger L was following the advice of Dr James Hansen, top climate scientist at NASA and recent visitor to the region, who said “It seems to me that young people, especially, should be doing whatever is necessary to block construction of dirty coal fired power plants”. Perhaps he was recalling the statement of American Vice-President Al Gore, that “I can’t understand why there aren’t rings of young people blocking bulldozers, and preventing them from constructing coal-fired power plants”.

This coming January, concerned citizens from around the country will descend on a small sheep farm in the Mataura Valley for three days of camping, live music, workshops, strategy and non violent direct action about the mining of lignite in Southland. These are people whom have been having genuine debate, who want to share, to learn, and to stand in solidarity with those who oppose Solid Energy’s plans to turn the valley into an open cast mine.

Climate change is unarguably the greatest challenge facing us. Solid Energy’s plans for massive scale lignite mining are so short sighted, and the damage they will cause to both the local environment and the global climate are so severe, that action to oppose them is essential. Not only are people justified in using any means to peacefully and creatively oppose them, but we are actually obliged to do so.

It is as Mr Key says in the closing of Roger L’s video: “we are the masters of our own destiny”. At no point in history have these words been more true.

From Edendale to Auckland, They Came With One Message: Fonterra, Quit Coal

As Environment Court approves Denniston mine, all eyes on Westpac